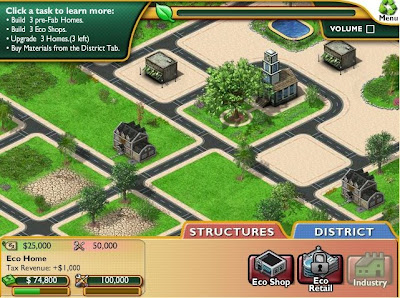 You have been elected the Mayor of your hometown and have decided to take the barren environment and Plan it Green! Bring back the natural beauty of your city, and create a brighter, cleaner future. Build eco-homes and apply green upgrades, all while bringing new clean jobs and industry to your city. Increase your Greendex as you leave behind the ways of the past and create a beautiful, sustainable metropolis!

see all top arcade games
Posted by Josh at 3:05 AM No comments:

Sunday at the Depot, With Speedbumps

Most of today went well. Hubby and I took the kids out today for some family time, and we had a good time, all in all. A few roughspots, but mostly a good day.

First stop, Home Depot. There was definitely a party at the Depot today! I remember practically living there when we first moved into this house. They were having a huge sale on outdoor grills today - we were SO close to buying one, but alas, the guilt and our budget clearly led us into the "we really don't need a new one" mindset. Whew, that was close.

After picking up some filters (water and furnace), a little birdbath, some suet (bird food) and some bug spray, we were off to Toys R Us. The kids were THIS close to not getting toys. ONE toy each, Daddy said. Did you get toys often when you were a kid? I certainly didn't. And we try to not spoil these guys, but every so often, with good behavior as the reason for them, they get to go to the store to pick out 1 toy each. But as I said, they were testing us today, and we were close to rendering them toyless. They turned things around, and there was much rejoicing. YAY!

You know, it's kinda interesting to watch my hubby be the disciplinarian. He's real good at it, really. He has that booming voice, but most of the time, it's his quiet, stern attitude that gets them all weepy. What is REALLY interesting is that I heard Princess really get under his skin today. Now we've had recent discussions about how I tend to react to Princess with anger as of late, and he makes a solid point there, and I'm not proud of it. I'm working on it. But to see him get his hairs up when she constantly doesn't listen to him certainly makes me take notice and file it all away. He sometimes really experiences how difficult it is to stay calm with that little pill. I am NOT losing my mind! That girl REALLY has a talent!

But I digress. They got their toys, after they shaped up and flew right. We proceeded to lunch at the mall, and then some hang out time at the bookstore. I love bookstores. Today it was reading with the girls while Daddy took Pumpkin about. It was wonderful.

Then we came home. OMG. These kids were SO tired. And bouncing off the wall. And weepy for NO reason. Did I tell you that Sweetpea has a tendency lately to WHINE? OMG. Take the batteries out of that kid! Needless to say, it was an early bedtime for all.

I can almost hear quiet up there. (Princess is STILL playing up there. PLEASE fall into deep slumber, my little sassafrass! Wait, is that Sweetpea singing? I KNOW that Pumpkin is sleeping - he was half asleep playing with his new helicopter earlier.)

Edinburgh has fielded 'HotScots', the first all-gay football team.
I can't see them doing too well against the straight teams.
I'm not homophobic or anything; I just don't think they'll be very tight at the back...
Posted by Josh at 11:06 AM No comments:

Her husband Richard Timney offered a full apology and a ?67 refund to UK tax payers. He added, "What will really annoy UK tax payers is that they were of very poor quality. I want a full public investigation into the Consumer Protection Act."

Gordon Brown has issued a statement offering his full support for Jacqui: "She hasn't the time to be f**king in films. She's too busy helping f**k up this country."

Devil's Elevator Movie Download
Posted by Josh at 1:01 AM No comments:

Last night sucked ass
I feel bad b/c I am not a fun person to be around right now - I just want to be left alone so I can sleep....forever
Worst hostess
Boys are stupid

Somewhat feel lilke that Limp Bizkit song:
It's just one of those days
Where ya don't wanna wake up
Everything is fucked, everybody sucks.
You don't really know why
---And I don't-several events and situations have led me here and I am not quite sure how to deal?

Hence I am having a Terrible Horrible No Good Very Bad Day(s) and I haven't even gotten out of bed yet....Ciao
Posted by Josh at 2:01 AM No comments:

And the Goof just keeps on goofing….

I have much to discuss with you. Here goes:

Friday the 13th is a terrible, terrible, awful movie that I just can’t help but love. Kerri was nice enough to indulge me and let me watch her copy with her while we munched on Subway sandwiches to the CHCHCHCHCHHAHAHAHAHAHA of that early work of Kevin Bacon. The film doesn’t scare me, it just freaks me out in a weird way…I can’t explain it…maybe it’s the awful music, the awful dialogue, the bad acting, the complete lack of suspense…I just don’t know.

But I digress. Friday the 13th this year was the day before my birthday, so Kerri, Suarez, myself, and a few others hit Lola’s for dinner and drinks. It was the kind of thing in which I invited 8, and expected 4 to show up, only this time, everyone plus a few others showed up. It was a nice time. I had a whole hell of a lot to drink.

Oh, and by the way, I woke up on Friday morning to find these from my lovely lady Kerri:

So, at this point, Saturday morning, my 26th birthday, 10am, I hadn’t gotten much sleep in days, and only about 5 here, so I had a wedding to go to….

My buddies Georgina and Frank finally tied the knot on the 14th (Mozel Tov!!!). After the service in Manhattan Beach, 100 of us drank champagne like it was the antidote at this place up in Pales Verdes (I think that’s what it’s called). It reminded me of La Jolla, it was so beautiful (the picture above is the view). I had a hell of a lot to drink, and ended up crooning some Dean Martin song and dancing my ass off. I can turn into a raging homosexual on the dancefloor if I so chose, which is what the ladies like…apparently.

Only something bad happened…

You know how the bride tosses the bouquet, and some lucky girl catches it and believes that she’ll be the next bride? Well, there’s another tradition…the bride takes off this garter thingy from her thigh, and tosses it to a crowd of dudes, and whoever catches it will be the next groom. Now, bare with me, and you have to believe me because it’s the truth…but I was forced into doing this…and Georgina’s family is Mexican…meaning it was about 20 5’5’’ Mexican dudes…and all 6’ of me…and I caught the damn thing.

Read nothing into it. NOTHING.

I’m no longer single
And this is how she feels about it.

Actually, this is how Chloe always looks. She's actually quite fond of Kerri, which is unusual, considering the fact that she is openly hostile to just about any girl I bring home. The boys, on the other hand, she's all over them. She's such a flirt.

Oh my lord did this movie suck. This is something wrong with this picture. You know what it is? Who cares? That’s what’s wrong. Amidst a lame convoluted storyline, characters we couldn’t give too shits about, underacting by Jennifer Connely, overacting by a just-out-of-rehab Nick Nolte, stupid 70’s style split screens and cheesy editing …yup…it gets worse…is the Hulk. While he does look pretty good…he’s invincible…nothing, and I do mean nothing, can hurt this thing. Not a fall from outer space into the San Francisco Bay. Not 4 Tanks. Not 6 Apache helicopters firing their guns full blast. Nothing. Hence, no suspense. Nothing is at stake. We don’t care. And all of that makes for a bad bad movie.

I'm doing my laundry tonight. I go down there to get my clothes out of the dryer, and some piece of shit stole my laundry basket. What the fuck kind of dickless fuckhead steals a laundry basket? They are 5 bucks at Target, for crying outloud! Get your own! I imagine it's some snot-nosed spoiled rotten 20-year old UCLA pothead drunk-as-a-skunk fuckwad who was too lazy to get off of his fat lazy living off of daddy's dime ass to get his own, so he got retarded and took mine. It's no skin of my back, it's just a matter of principle. This isn't some poor guy stealing a loaf of bread to feed his starving family...this is MY LAUNDRY BASKET. I hate thieves. They deserve to have their hands chopped off. End of story.
Posted by Josh at 3:26 PM No comments:

At this moment, what is your favorite...